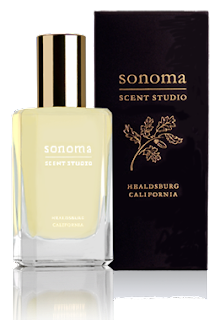 So I've taken off my perfumer's hat (for this post) and slapped on the reviewers' hat to tell you about this perfume that I've been wearing since last Wednesday ~ Sienna Musk by Sonoma Scent Studio.

I usually don't like to cheat before I do something like this, but I did this time, reading all the previous reviews of this perfume before coming back here and doing my own thing.

What happened is I woke one morning about a week and a half before Christmas knowing full well I had to go to the box mall or hit up an online shop with super fast shipping to get the perfumeophiles some new holiday scents -- time was ticking away, this was the last thing on my list, I was vacillating between going for what I know and heading into the wild unknown. So of course, you know me, I chose the latter! I think it must have been something I saw on FB (yes, I have a new FB account with fewer than 50 "friends" and it's refreshingly manageable, just how I like it) and Laurie Erickson's name popped up and a link to Sonoma Scent Studio and the interest was piqued and my 'buy small and not corporate' ire kicked in and I thought, what the hell?

I have never had any previous contact with Laurie Erickson, though I do know about Sonoma Scent Studios as it's quite popular and non-NBP, which is probably why I waited to so long to try them out (the non-NBP part), so I wasn't completely in unknown territory here -- just a little on the dark and shady side, perhaps, and I mean that in an ophthalmologically myopic sort of way.

I never really know what to expect when I get packages from the small niche perfume houses, and believe you me, I've been receiving truckloads of late and -- well, let's just say that some of the creations I've worn and brusquely washed off were zombie-scary. Really. I have segregated these baddies into a perfume coffin, a tin box with a latch, kept far away from the goodies, lest I accidentally dab a bit on in the mad morning scramble before work and rue the day . . . all day . . . along with my co-workers who have to pass me at the door when coming in and out for work.

I perused and perused, going from one scent description to the next on the Sonoma Scent Studio site, clicking the links to blog write-ups and trying to decipher the codes of scent I was reading. I chose two perfumes based on the descriptions I found and purchased those for the perfumeheads -- this was about a week and a day before Christmas (I did say I perused, taking two days to decide what to get) -- and guess what? I actually received the order before Christmas, as well as a number of lovely samples, and that's where Sienna Musk comes in to play.

Sienna Musk was literally the last perfume I tried out of the sample packet because I'm not a big fan of the musk family -- at all -- the sad result of years of mother's Jovan Musk days wherein she sprayed, and quite liberally I might add, that smell on her person and clothing, thus imbuing her closet and most of our house with its reek. So, yes, I delayed the wearing of Sienna Musk 'til the very end. I don't know for certain now whether that was a mistake or a blessing, suffice it to say, I am enraptured by Sienna Musk. It opens with a flush of ginger and spice and a soft backnote of citrus, then goes straight into a nostalgic soapiness, like shave soap smelled from a few rooms over, then tumbles into the 'musk'. This isn't a furry in your face musk. No, it's skin-like, with mild smoky undertones and a sweet creaminess that tugs you not so reluctantly further into its warmth. Then the spice returns and then wavers, folding into the skinness of the scent, rolling in and out, back and forth, until it's no longer a perfume on the skin but is you. Or, rather, me. Sienna Musk reminds me of L'Artisan's Tea for Two, not a doppelganger, but more a scent of a similar thread. Which is why I now adore Sienna Musk.
Email Post